Automakers like Ford, GM, Volvo and Tesla made major strides in 2016 for autonomous vehicle technology, and are closer to making driverless cars a reality for the average consumer. Meanwhile, Uber made news when they introduced self-driving fleets to the public. While driverless cars may not be pulling into most driveways in the immediate future, it’s clear the race is on.

While the U.S. Department of Transportation announced its policy for autonomous vehicles in response to the emerging technology, it is unable to fully anticipate inevitable advances on the horizon.

Expert Weighs in on Autonomous Technology

Meg Novacek is an independent consultant and reliability expert with 28 years of automotive experience who offers engineering and quality process improvement advice to the industry. She speaks on the complexities of blending human control with autonomous control. “You have to consider a wide range of driver abilities and attentiveness,” she said in a 2015 interview with Ward’s Auto.

Systems must perform perfectly to gain the trust of drivers. Novacek notes that unknown factors like inclement weather, traffic conditions, other drivers, and unfamiliar terrain need to be considered as engineers develop technology. Physics of Failure techniques play a major role in designing electronics and systems to meet these challenges.

Ms. Novacek tackled the top three challenges facing autonomous vehicles in her recent webinar Reliability Challenges Facing Autonomous Vehicles. Her expertise is rooted in more than 20 years of experience in Powertrain Systems including Functional Safety, five years in Quality Assurance and Process Models and most recently as Director of Vehicle Cybersecurity and Director of Reliability and Quality at Fiat Chrysler Automotive.

Click below to catch this pre-recorded webinar and discover how Physics of Failure techniques play a major role in designing electronics and systems to meet today's biggest autonomous vehicle challenges. 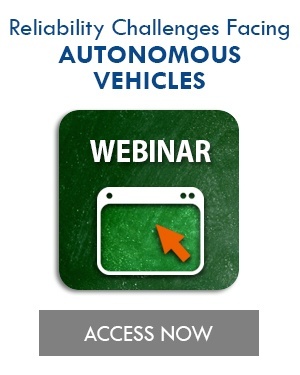