Why Physics of Failure is Preferred to MTBF for Reliability Testing

The importance of data in a Design for Reliability (DfR) practice cannot be understated. Success revolves around reliable design, which can be approached from one of two methodologies: mean time between failures (MTBF) or Physics of Failure (PoF).

The merits of the two approaches are widely debated. MTBF is reactive, meaning data is gathered based on physical testing during production, but there’s no practical application to design improvements. You gain insights into failure, but not failure avoidance. Conversely, PoF mathematical modeling is proactive. It is used to analyze and improve the design during initial concepts and the design phase. With PoF, failure risk is minimized or eliminated well before production.

Based on this top-level comparison, and given the considerable time and money invested in design, PoF appears to easily win the reliability debate. But, is there more to the story? Let’s dig into MTBF and PoF.

The handbook’s failure rate models of various electronic system components are based on the best field data available for parts and systems, measurement of which ultimately requires physical failure of a system during operation.

This forced downtime is just one of the shortcomings of MTBF. Other significant limitations include:

The nature of MTBF provides no motivation for failure avoidance, and is better suited for logistics and procurement. Think of MTBF as reflecting the number of components that fail instead of the rate at which they fail.

On the other hand, PoF is focused strictly on unplanned failure avoidance. It uses the principles of physics and chemistry to enable modeling and simulation of the root causes of failure such as thermal cycling, vibration, shock, fatigue, fracture, wear and corrosion to design-in reliability. PoF leverages this knowledge to predict reliability, the probability of failure over the product’s life and improve product performance.

PoF employs scientific principles to create complex algorithms that are substituted for the physical testing required by MTBF. There is no waiting for physical failure to calculate reliability.

PoF algorithms are limited in that they assume a “perfect design,” and they can be influenced by environmental factors like temperature, vibration, humidity and power cycling. But, these drawbacks are outweighed by the advantages of using science to capture an understanding of failure mechanisms and evaluate useful life under actual operating conditions.

PoF revolves around root cause analysis and total learning to increase reliability by:

Taken in total, PoF provides a better alternative to testing than MTBF in that it allows more informed and quantifiable decisions to be made in the design stage, eliminating the need for physical failure or reliance on data that is known to be inaccurate. Further, PoF more readily provides for development and expansion of new tools that improve reliability testing, like our Sherlock Automated Design Analysis™ Software that redefines failure behavior and reliability prediction.

Let DfR Solutions put our industry expertise and Sherlock software to work for you. Call us today at 301.474.0607 or complete our online contact form. 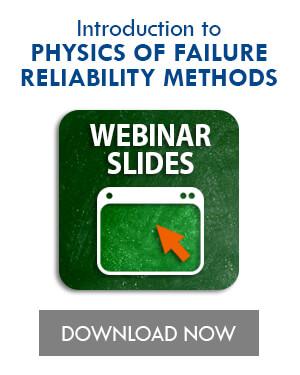